About 10 years ago, I saw an announcement in  WoodenBoat for  a boat design competition.  I was immediately drawn to the photo at its center. It showed Tom Hill’s Long Point Skiff, a boat I had always admired, running fast and handsome. But I was really intrigued by the green boat speeding along beside her. “Now that is one shapely craft. Looks like a miniature lobster boat,” I thought.

As time passed I followed the development by Aaron Porter and Tom Hill of the Jericho Bay Lobster Skiff and discovered that the “green boat” was the original from which the lines were taken for the strip-planked version. And I was secretly pleased that I had a pretty decent eye for a boat:  designed by Joel White and built by Jimmy Steele isn’t a bad pedigree.

When I saw Aaron’s classified in WoodenBoat for that same skiff, I was off to Maine in no time with a check and a trailer, and I was proud to be the new caretaker of such a significant craft.

Structurally she was in good shape, but the bottom planking was pretty rough, and 40 years of hard use meant that the rails, seats and transom could use some work. Also, with Aaron’s agreement, I thought the boat would best be modified for life on a trailer with a layer of cold-molded cedar and fiberglass laid diagonally over the planking. I had trouble finding cedar locally, but wandering through a home center one day, I spotted a pile of 1X4 cedar decking that was almost perfectly clear and with a lot of work on the table saw turned it into 2-inch wide strips. They were set in epoxy and covered with Xynole polyester fabric that has proven to be extremely tough and a great surface for the glossy “Chesapeake Green” finish.

Material for the center console was easy to find: My son’s old made-in-Maine “Cedarworks” swingset was getting very tired, so I sawed it up into planks. (Don’t fret about that, he’s 23 years old and doesn’t do much swinging any more). The console was built from plans I had for the Long Point Skiff, which sort of rounds out the whole story.
Due to moving, building a new shop and taking a year off to go on the Great Loop in our Eldredge-McInnis motorsailer (www.memsahibsvoyage.com), the whole rebuild took about four years and she went in the water in 2014.

At about the same time I got the JB Skiff in the water, I started to build a maxi-trailerable the Tardis: www.mvtardis.com

For most of the time I was building the Tardis, I kept the JB Skiff in the water at Guilford Yacht Club and used her lightly just to run around and enjoy the water.  She has always been stored indoors at my shop (or my neighbors garage) and winterized by Guilford Boat Yard, a Yamaha dealer.

I did not use the JB Skiff last summer since I was running the Tardis, but she is winterized and ready to go.

Engine:  I got the engine when I got the boat.  It is actually a 2003 vintage Yamaha 25 hp four-stroke, but when I got it in 2012, it was basically new in the box:  one of the owners of MAS Epoxy had been going to build a skiff, but simply never got around to it and sold it to me on Craigslist.  Guilford Boat Yards changed the impeller and all the seals and declared it in as-new condition.  Has always run great

Trailer:  New EZ Loader that I got when I picked up the boat.

Other:  Bilge pump, two-six gallon fuel tanks, one under the thwart, one in the bow.  The bow tank really makes the boat run flat and adds about a knot in speed.

Legal:  Jimmy actually had a hull identification number on the boat, so I never had any trouble registering, and she has a current Connecticut Registration for both boat and trailer.

21 knot top speed, but I usually run 13-15.  As Aaron has noted in an article in WoodenBoat, this is an incredible sea boat for a 16-footer, since it is actually build like a lobster boat with a high bow and a curve right at the waterline that throws away all the spray.  I have had her out in 3 foot waves, and simply pull back to 10 knots, and she runs great.

People love the looks of this boat!  You will get nothing but complements: 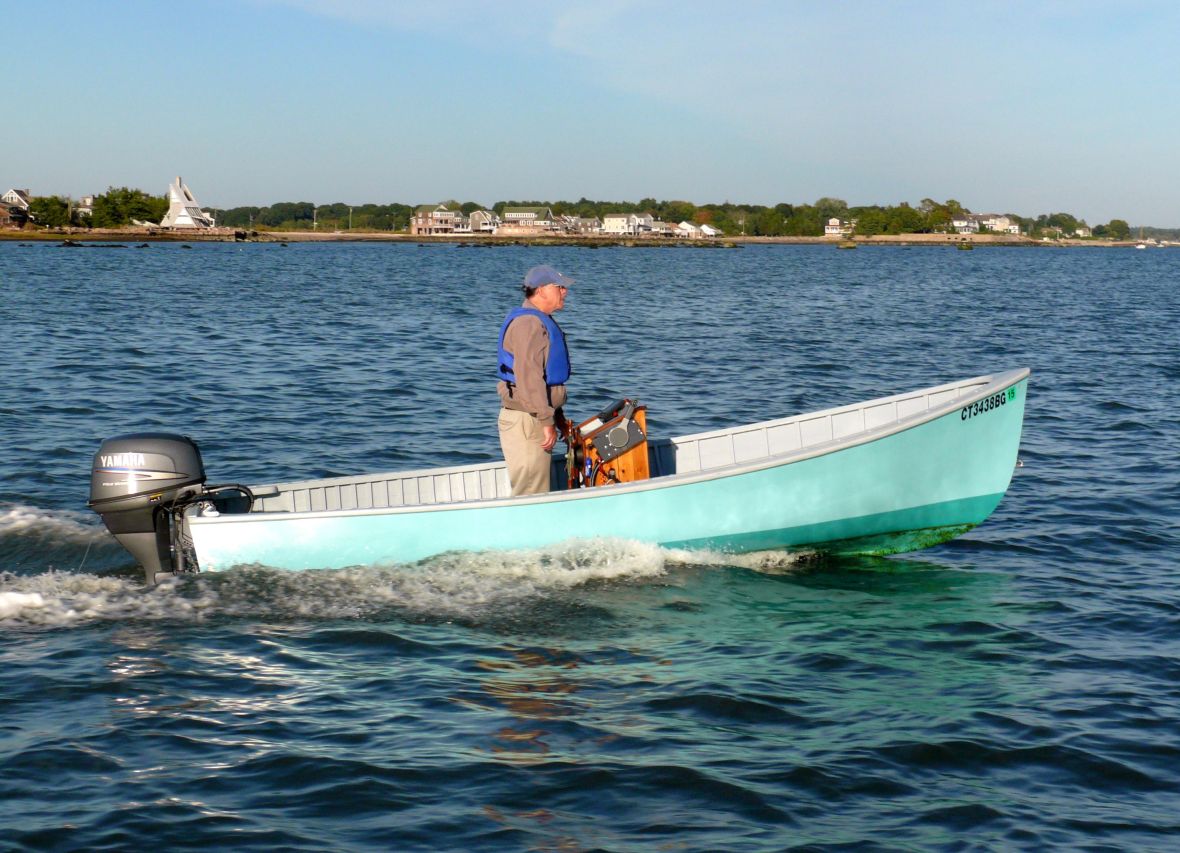 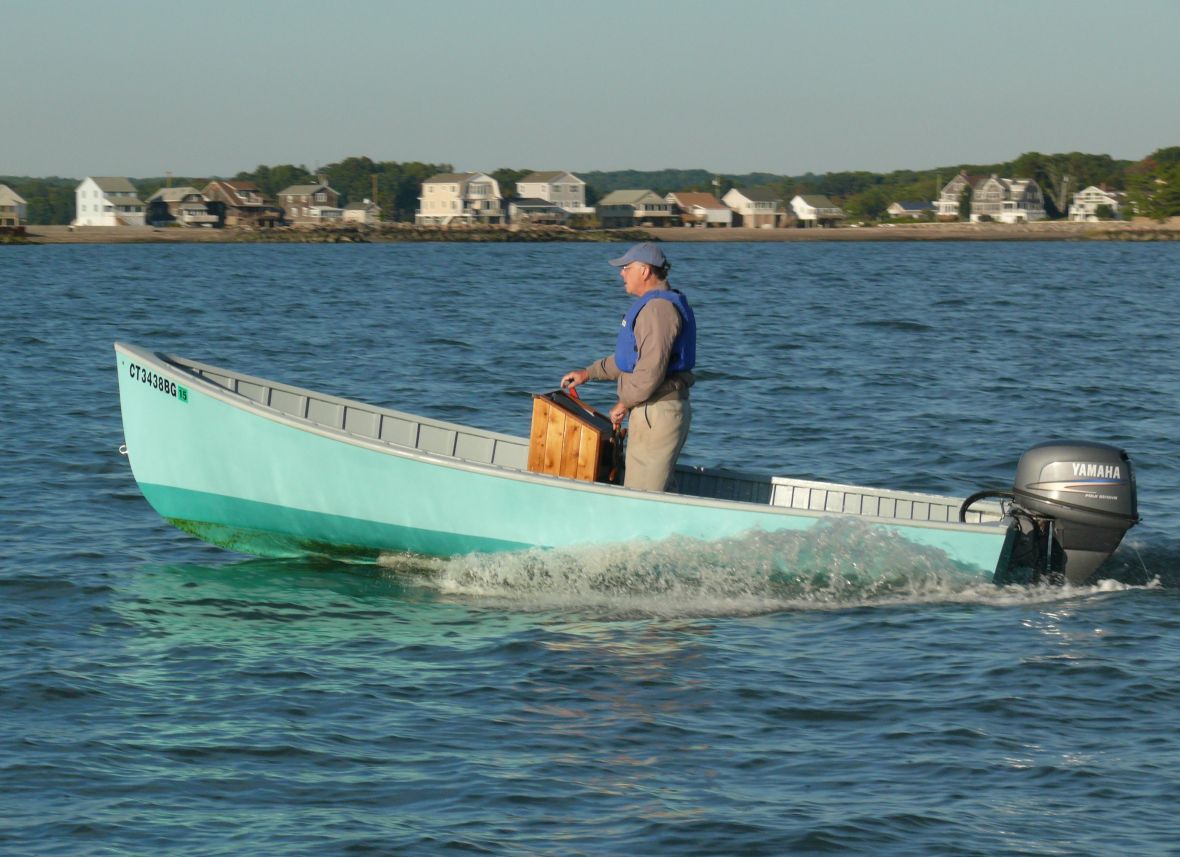 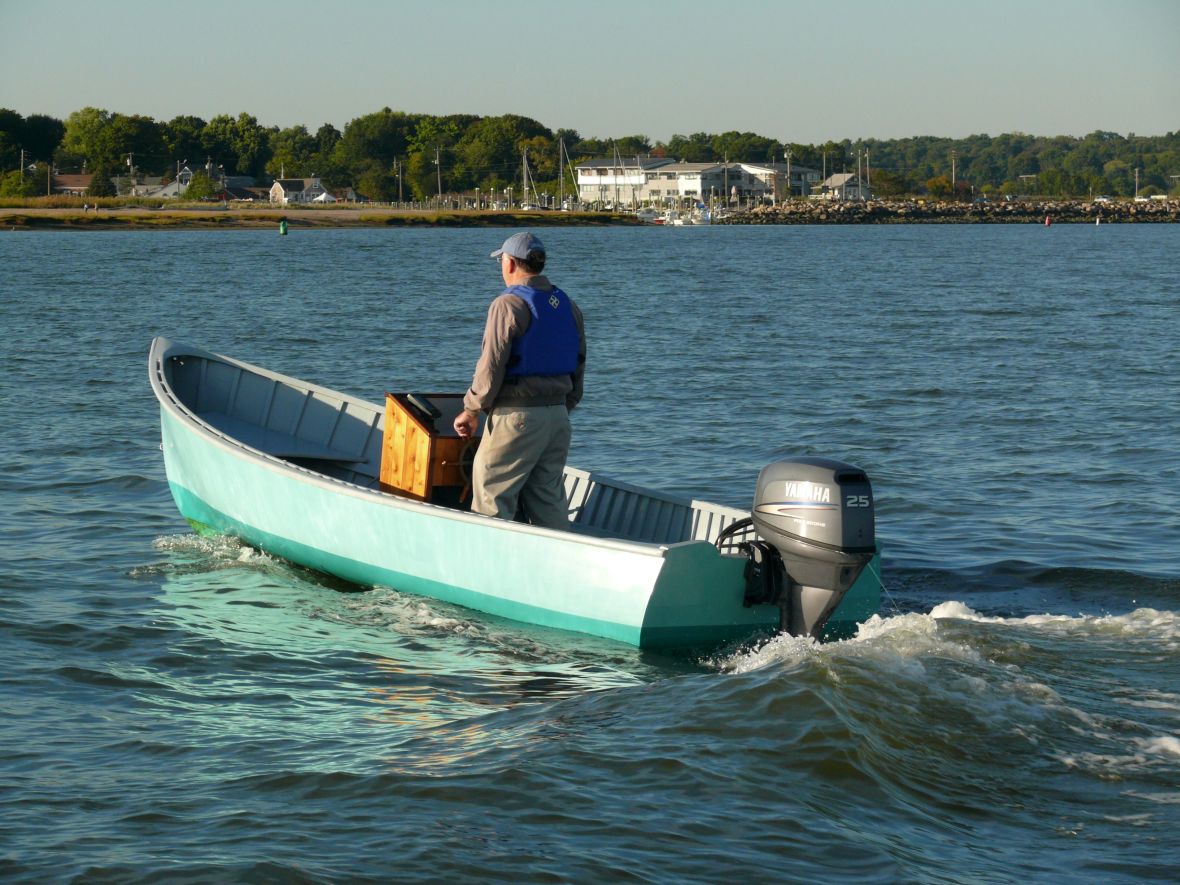 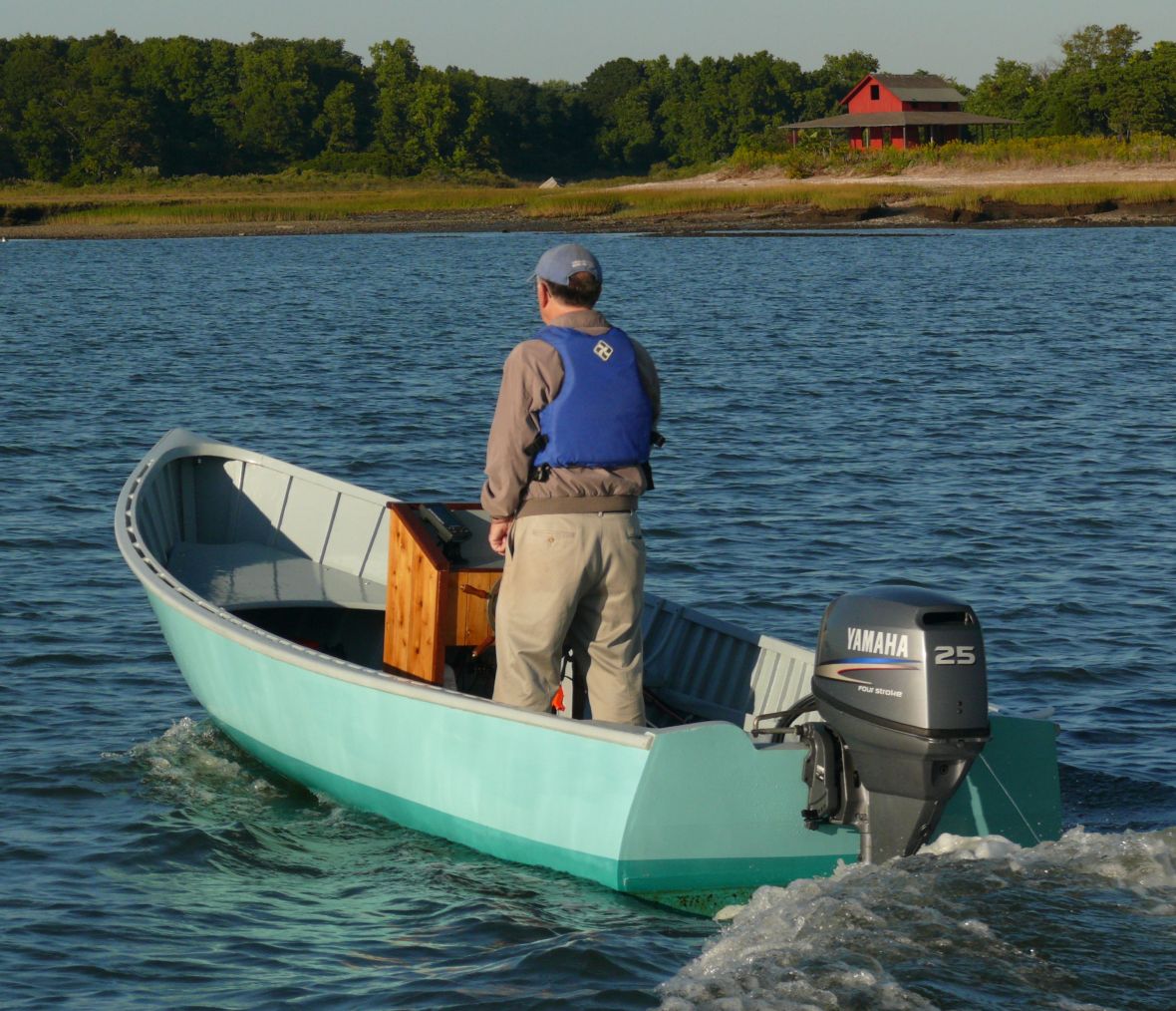 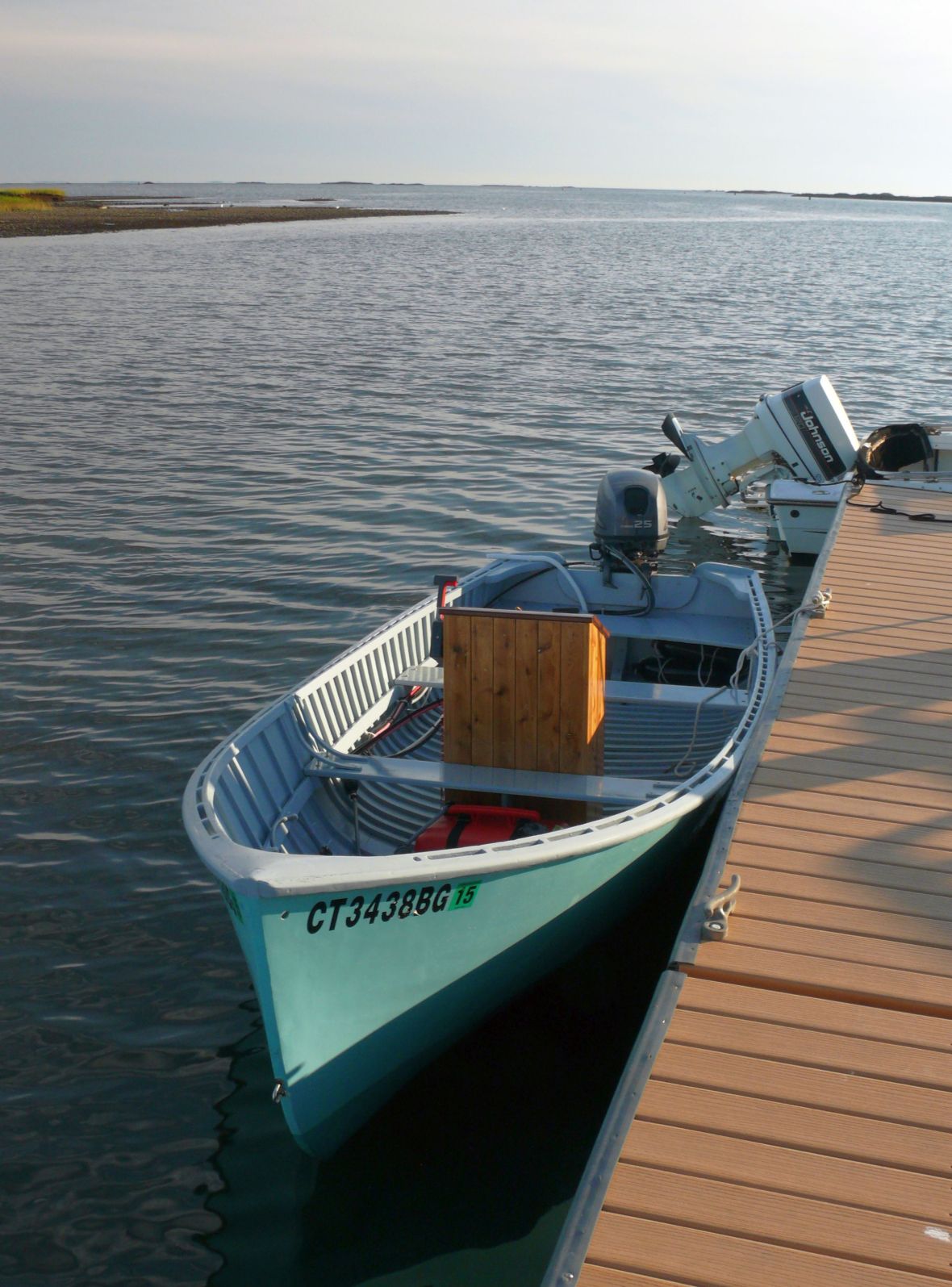 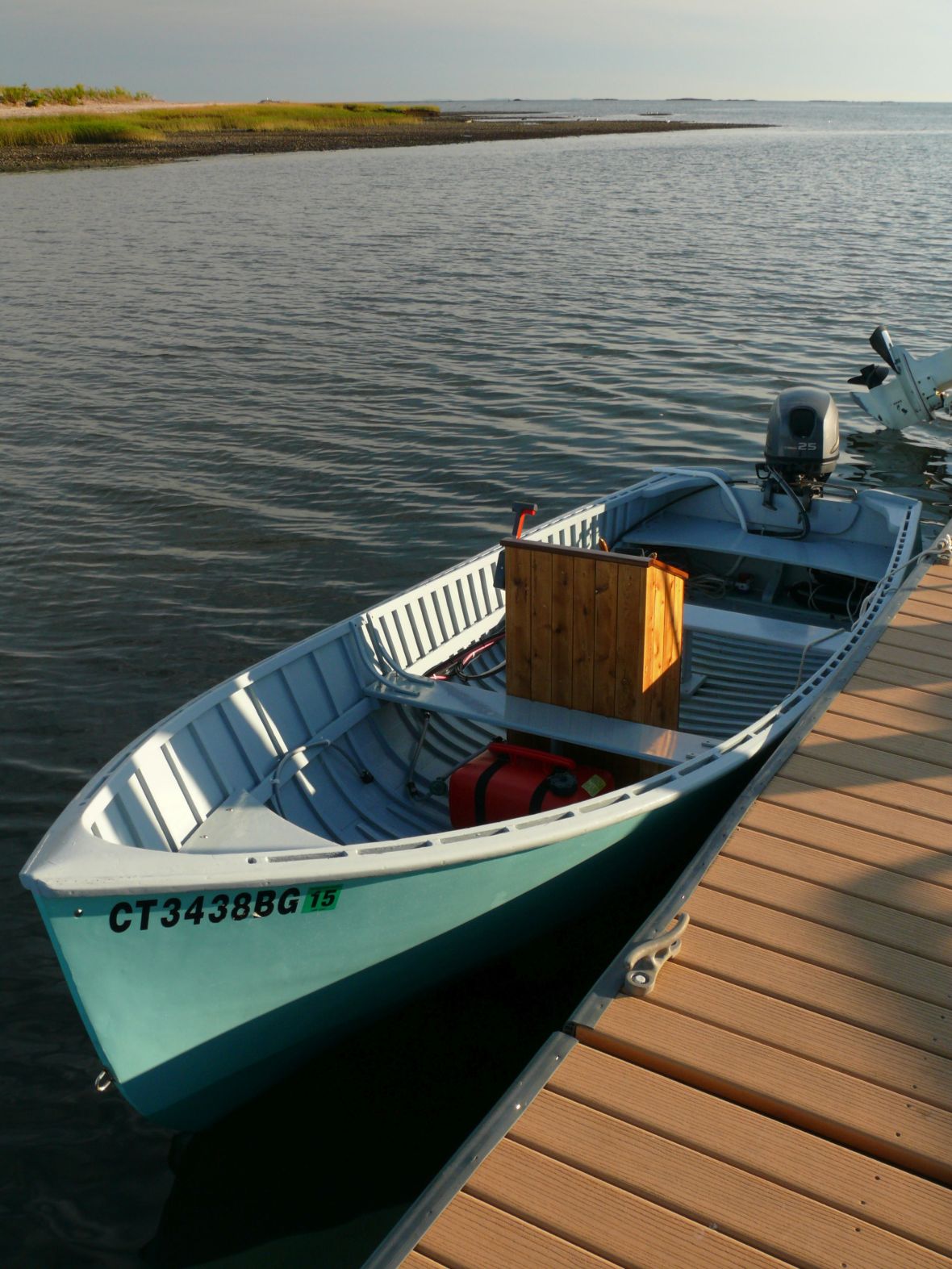